A lingering trade war between two of the world’s largest economies – the U.S and China, and a deteriorating global growth outlook have left investors apprehensive about a possible recession.

Here are three of the recession signals that investors and recession watchers are seeing:

A yield curve can be used to gauge the direction of the economy. It is a way to measure investors feelings about risk because it can have a tremendous impact on returns from investments.

The yield curve above shows a plot of the yields on U.S. Treasuries – debt sold by the federal government – ranging from 1-month bills all the way out to 30-year bonds.

Economists watch the gap in yields between longer and shorter maturities. Longer-dated maturities typically yield more than shorter-dated ones because investors expect to be paid more for taking the risk of having their money tied up for longer.

A wide spread is usually associated with a stronger economy and a narrowing one indicates diminishing prospects for growth.

When the gap turns negative as it did recently with 10-year note yields dropping below those on 2-year notes for a time, it’s called an ‘inversion.’ That’s a negative signal for the economy because a recession often comes in its wake, but it can take as long as two years for a recession to begin. 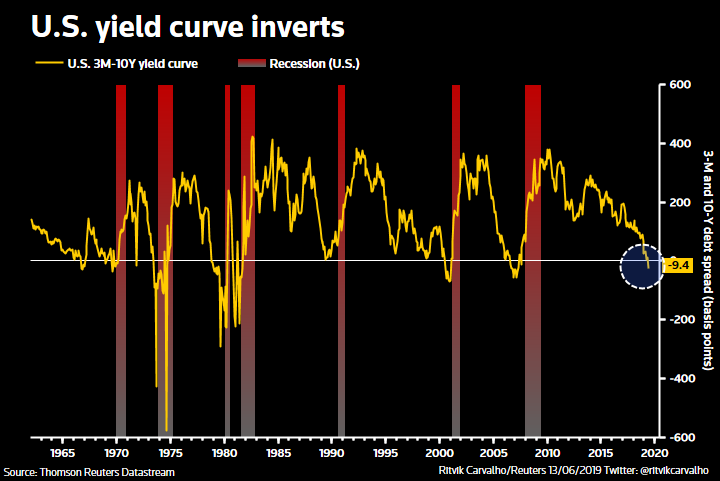 Analysts breathed a sigh of relief on Thursday August 15 when the sign disappeared, but caution is needed.

Just because the yield curve returned to normalcy on Thursday after the warning signs on Wednesday, doesn’t mean all signs of a possible recession have disappeared.

Currently, interest rates are historically low, and the bond market is still pricing in more cuts from the Federal Reserve. In addition, the yield on the 30-year Treasury note dipped below 2% for the first time ever, while its 10-year counterpart fell to a three-year low.

Walmart shares rise on strong earnings despite recession signals in the U.S

“When interest rates are this low, what it is essentially saying is 10 years out, 30 years out, the market isn’t convinced that the US economy can grow at somewhere between 1.6 and 2%,”. “That’s pretty horrifying,” she said.

The output gap is the difference between actual and potential economic output, or gross domestic product, and is used to gauge the health of the economy.

However, the output gap can linger in positive territory for years before a recession hits.

Falling equity markets can signal a recession is looming or has already started to take hold. Markets turned down before the 2001 recession and tumbled at the start of the 2008 recession.

On a 12-month rolling basis, the market has turned down ahead of the last two recessions.

The stock market tumbled 800 points, or almost 3.1%, to 25,579 on Wednesday due to recession fears triggered by the inverted yield curve.

President Trump addressed the inverted yield curve in a Twitter message on Wednesday. He called the inverted curve “crazy” and blamed the Federal Reserve as “too slow to cut” rates.

..Spread is way too much as other countries say THANK YOU to clueless Jay Powell and the Federal Reserve. Germany, and many others, are playing the game! CRAZY INVERTED YIELD CURVE! We should easily be reaping big Rewards & Gains, but the Fed is holding us back. We will Win!